New thinking about the third stage of labour 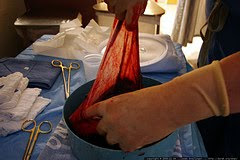 For years it has been accepted by many that active management of the third stage of labour is the preferred way of birthing the placenta and membranes. But in New Zealand, midwives have been questioning this, saying that physiological birth is far safer for women who have had normal labour and no risk factors.

The latest audit of New Zealand midwives that has come from the New Zealand College of Midwives (NZCOM) suggests that women who have physiological third stage of labour, overseen by midwives who know what they are doing, are less likely to bleed heavily compared to women who have active management. This result is contrary to the commonly held belief that active management of the third stage reduces blood loss following birth.

Follow-up to this audit is going to be carried out by Professor Cecily Begley (Dublin) - she is reviewer for the Cochrane Database. Professor Begley is coming to New Zealand in January 2010 to talk to midwives who regularly carry out physiological management of the third stage. If you are interested in knowing more, please contact NZCOM.

I have always said it is that mix and much approach that causes trouble, and not being patient enough when you are waiting for a placenta to arrive.

Fantastic Sarah! Great to see these stats out there. Same as we found with our cohort study (under review for Women and Birth). Kathleen Fahy published a critique of the Cochrane Review
Fahy KM, ’Third stage of labour care for women at low risk of postpartum haemorrhage’, Journal of Midwifery & Womens Health, 54 380-386 (2009)

and we had a paper published in Women and Birth

Really good to see the evidence accumulating. I agree Pam, women in the developing countries could really be helped by a better understanding by everyone about third stage. Seems like much of the ancient wisdom has been lost.

I meant to say "mix and match"!

Thinkbirth: Thanks for those references. It's very exciting to see good data come out on New Zealand midwifery at long last. I am also looking forward to seeing the results of the work that Deborah Davis et al is doing

I am a midwife in England and for some years I was a community midwife but unclear exactly what a physiological third stage entailed, because, like you, I was not trained in this until I researched this for myself.
I now work in maternity risk and I believe that third stage management is left wanting at times. As a result of this, I am undertaking my dissertation asking if active management of labour has marginalised midwives ability to undertake the physiological third stage. I thought the Dixon 2009research was great and makes a difference when it is midwifery led rather than obstetrically led! I would appreciate if anyone can lead me to further studies in NZ which seems to be more focussed on physiological management of labour. Thank you.

I am afraid I am not 100% up on all the research that is being out in NZ. The ones I know about at the moment is the place of birth study by Deborah Davis and fetal heart monitoring by Robyn Maude. Anfd, of course, there is the work by Caroyn Hastie in Oz: http://internationaldayofthemidwife.wikispaces.com/International+Day+of+the+Midwife+2010

For more info about NZ research, I'd get in touch with the NZ College of Midwives: www.midwife.org.nz