Are you ready for the 2015 Canberra International Film Festival? 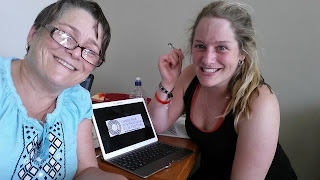 My daughter, Ellen, and I have been asked to be a social reporter for this year's Canberra International Film Festival, CIFF 2015. I was delighted to agree to take on this role because I am a huge fan of CIFF, however, I was a little perturbed when I saw this year's program.

It appears that CIFF has significantly changed its focus. Gone are the European and American films. This year's program is made up of Asian, Australian Indigenous and Canberra films. To be honest, I wasn't sure how I felt having main stream films removed from the festival. I have spoken to a few CIFF stalwarts, who have not welcomed this change.

I put this concern to Andrew Pike, who is the festival manager. Andrew replied that this year's festival program is about getting back to a more traditional feel for a film festival and giving people access to films they are highly unlikely to see in the main stream cinema. In particular, CIFF 2015 is focusing on local Canberra film-makers with the aim of putting "Canberra" back into "Canberra Film Festival".

The program managers are very passionate about film and this year's festival and Andrew told me to trust them and go along for the ride.

So I am going to take Andrew at his word.