Why I don't blog much any more - and is there a cure?!

I have been blogging since 2007, and up until this time last year, wrote fairly regular posts, at least three times a week. But looking back at the last year, you can see that there has been a rapid drop off, to the point where I wrote just one post in July and again in August.

You could be forgiven for asking why it matters; after all, it may indicate that I have found a life away from the computer, which has got to be a good thing...hasn't it?!

In a way, that has been true. Since moving to Canberra, especially in the summer months, I have been spending more time outside and enjoying the beautiful warm weather, especially on a Sunday, which is when I typically write my blog posts for the week.

But it does matter that I am not blogging much these days because of the benefits I found when I was doing it regularly, which include:
Because I am not blogging at the moment, I feel as if my networks and the conversations I have been involved with are slowly drying up. And this is not good for my professional growth in the long term.

So why aren't I blogging at the moment?

Much has to do with my new job.  Because it is a national role, I am extremely wary of what I talk about on social media. So I feel I must only blog about "neutral" topics that aren't going to get me into any kind of trouble, which is a tad tricky at times if I cannot come up with any ideas.

I spend a lot of time working on the Australian College of Midwives' Facebook page and use a lot of emotional energy figuring out what is appropriate to post on that page, and responding to comments there. So by the time I get to my social media platforms, I'm too tired to start again with the process. You have only got to look at my personal Facebook page to see how it has changed from a professional page, to almost completely personal comments and links.

On a personal level, I don't have much time where I am completely alone to spend thinking, or I am too tired, and just want to blob and watch reality TV.  And the studying I am doing isn't inspiring any creative thought.

So how do I get my blogging mojo back? Any suggestions?

I would especially love to hear from people who manage professional social media sites - how do you juggle that work with your own social media needs?

Saying goodbye to our darling Angel 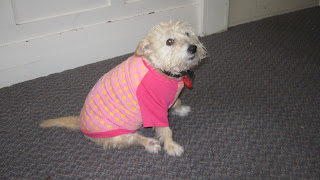 It's been a sad couple of months.

Six weeks ago I had our darling cat, Blackie put down. She had been with us for nearly 21 years and was a vital part of the family.

If that wasn't enough, I have now just had our dog, Angel, put down today. She was 16 and a half years old, and like Blackie, was an integral part of the family. But also like Blackie, she was very old and her quality of life was suffering.

We got Angel from the SPCA in Gisborne when she was about three months old. She was an absolute terror when she was a puppy, and had quite a few adventures. I lost her once in the bush, about an hour's drive outside Gisborne, when I was visiting a midwifery client. Mark and I went looking for her twice a day for a whole week, and eventually gave up, and broke the sad news to the kids. On the morning of the eighth day we had a call to say that the driver of a logging truck had picked her up. She wasn't half as quick to go wandering off after that. 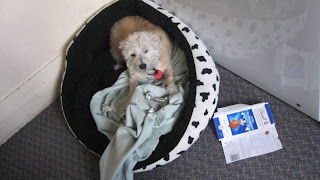 Angel was a bit of a rascal when it came to chocolate. She loved nothing better than to steal chocolate out of the grocery bags, if I made the mistake of leaving my shopping on the floor. 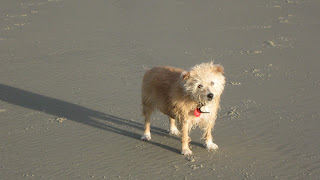 She loved going down to the beach, which I think was a result of the many hours we spent at the sea side at Gisborne when she was a puppy. We spent many hours trying to teach her to catch sticks or balls, but all she loved to do was run through the waves.

One day I took a friend down to Broad Beach, which is just outside Dunedin,. We took our shoes off and went for a long walk. Suddenly I realized that Angel wasn't with us. And knowing her history for running off, I knew I wouldn't have a chance of finding her in the fields that surround the beach. We spent ages calling and calling her, and eventually I gave up. But when we got back to the pile of shoes, we found her there guarding them, and waiting patiently for us to return. 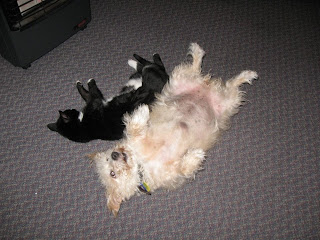 The other thing that used to make me laugh was the love-hate relationship that Angel and Blackie had. Blackie knew that we would regularly let Angel out into the garden so that she could do her thing. So as soon as Blackie saw us head for the front door, she used to dart into the door entrance and wait for Angel to pass by. As Angel passed by, she would whack Angel with her paw. Then, she would wait for Angel to come back indoors and give her another whack. Poor Angel never worked out a way to get past her without being clobbered. 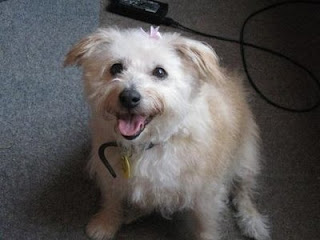 Angel was so much a part of our lives, and for so long that we took her for granted. But now she is gone, the house is going to feel very empty.

Email ThisBlogThis!Share to TwitterShare to FacebookShare to Pinterest
Labels: About me
Newer Posts Older Posts Home
Subscribe to: Posts (Atom)