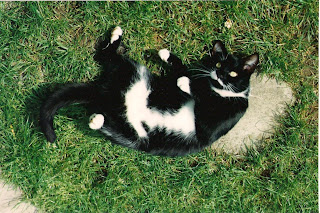 Today has been one of the most difficult days of my life because today was the day I had my cat, Blackie, put down. This is the first time I have ever had to do this with a beloved family pet, and those of you who have faced similar decisions know how painful it is.

I know Blackie was only a cat, but she was my first proper (not counting guinea pigs!) family pet. We had her for nearly 21 years, so my kids cannot really remember life without her.

She was practically feral when we got her as a 3 month old kitten. When we got her home, she disappeared and I thought she'd escaped from the house and we'd lost her. But she had managed to find a small crack behind a wall and hid in that for days until eventually she plucked up courage to come out. 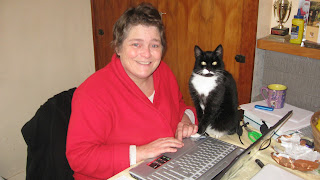 She became the most affectionate animal, and I know my husband will really miss her because as soon as he came home from work, she would call him and cling on to him for grim death. As for me, she would curl up with me when I was on night duty and keep me warm when I was sleeping during the day.

Blackie traveled the world with us. She came over to New Zealand when we moved from the UK. It cost more to bring her over than it did the two kids put together! Another fond (but stressful) memory was driving her down from Gisborne to Dunedin in the car, when we moved house. We had the four of us squashed into the car, with Blackie, and Angel the dog, plus I don't know how many suitcases. It took three days to drive down. We didn't have a cat box because there wasn't room, so we kept Blackie on a lead and took her for walks whenever we stopped for a break. In all our moves over the years, she never made a fuss. 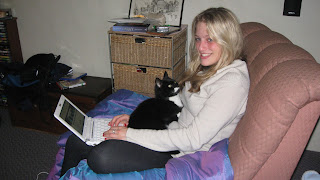 In the last couple of years, she became more frail and didn't move much from her electric blanket. She had occasional fits and I thought she was going to die over a year ago. I think she was trying to reach the world record for longest living cat, which is 24 years - at nearly 21, she almost made it. I also think she had lost a lot of her sight.

Over the last couple of weeks she has got to the stage where she really needed someone to keep an eye on her most the time. Whilst she was happy in herself, she wasn't managing to use her litter box properly, and needed help with finding her food. Sadly, I am now living in Australia and my hubby spends long hours at work, so we felt it was the right time to let her go. However, the decision to have her euthanised was the most difficult decision of my life. My head told me it was the right thing to do, but my heart found it very hard.

In the end, she went very easily - it seemed to me that she was ready to go.

We will all miss Blackie very much - she really was one of the family. She has gone from our lives but not from our hearts. 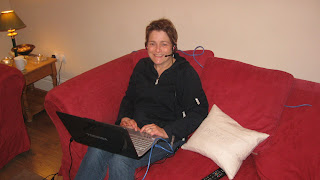 Social Media Unites International Midwives - 22/4/2013  Hundreds of midwives from around the world will gather online for the 5th Annual Virtual International Day of the Midwife. This free, and open online conference, lasting 24 hours, will celebrate International Day of the Midwife, starting on 5th May at 10am, New Zealand time. Frances Day-Stirk, President of the International Confederation of Midwives, will be opening the event. This is an opportunity for midwives from around the world to gather and discuss new research, and meet colleagues from different countries and time zones. "This virtual midwifery event is the only one of its kind in the world,” says Sarah Stewart, Facilitator and midwife, Australia. “It is a truly unique experience because it provides people with the opportunity to network, and have around the clock live discussions with midwifery professionals, researchers and educators they might never meet in real life. This makes it very easy and quick to disseminate and share knowledge and research."

Now in its 5th year, this international conference is drawing speakers and participants from countries as diverse as Kenya, Bolivia, Australia, UK, Spain, USA, Denmark, Tanzania, Haiti, Canada, and India."Meeting colleagues from around the world in a virtual environment will allow us to discuss issues such as safe motherhood, and the continued negative discussion around women's choice and homebirth, and also allow us to stay connected and continue conversations in an online world, past the end of the conference" says Stewart. Other discussions will include midwifery in under-resourced countries, preparing fathers for birth, working with women who have been sexually abused, reducing excessive weight gain in pregnancy, and breech (bottom-first) birth.

"There is so much in the press about the harm that social media can do. In this case, we are using social media, including Facebook, Twitter, and blogs and wiki, in a positive way to bring about international collaboration”, remarks Stewart.

This event is open to midwives, students and anyone with an interest in childbirth, labour and midwifery processes. For further information about the 5th Annual Virtual International Day of the Midwife, please visit the website: http://vidm.org

WHO and competencies for midwife educators 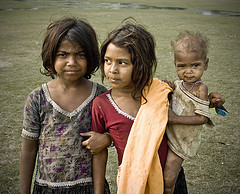 The World Health Organisation is in the process of developing a set of ‘Core Competencies for Midwifery Educators’. At a global consultation in Geneva in December 2012 a set of draft competencies necessary for all midwifery educators were discussed and further developed. Following this a Technical Review Group was established to further this work.

These competencies are now ready for a wider global consultation.  And so midwives and midwife educators are invited to fill out a brief survey which seeks feedback on the draft competencies: https://atrial.qualtrics.com/SE/?SID=SV_3F9ZYoaifVwow73

What I am not sure about is the relationship between these proposed competencies and the ICM work in this area, including the ICM standards for midwifery education: http://www.internationalmidwives.org/what-we-do/global-standards-competencies-and-tools.html

What do you think should be the core competencies of a midwifery educator/lecturer?

The other day I facilitated a discussion for the Australian Associations Forum about how to get started with social media. I am not sure if the audience was disappointed because instead of talking about tools and technology, I took them right back to basics and asked them to think about some basic issues before launching into setting up a Facebook account etc:
Here is the presentation I gave.

What other issues do you think associations and non-profits should think about when they start up with social media?
at April 07, 2013 No comments:

Program confirmed for the 2013 Virtual International Day of the Midwife 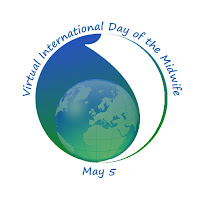 I am delighted to be able to say that this year's program for the Virtual International Day of the Midwife is up and running and can be accessed here: http://vidm.wikispaces.com/International+Day+of+the+Midwife+2013

I don't think there is quite the geographical range of speakers that we had last year, but none the less, we have a number of  under-resourced countries and indigenous midwifery programs represented, such as Tanzania, Bolivia and India, which is very exciting. And we also have some real midwifery stars taking part, including Hannah Dahlen, Gloria LeMay and Mavis Kirkham.

The main problem we had this year is that we had too many EOIs, so we had to decline some wonderful speakers and topics. At the same time, we did not quite have enough speakers to run concurrent sessions.

It is really difficult to know what to do. On the one hand, it is fabulous to know that we're getting bigger and more credible in the midwifery world. It may well be that next year we have enough speakers to run concurrent sessions. On the other hand, the bigger we get, the more problems we are likely to have, especially with technology. And, of course, with more speakers comes the challenge of finding more facilitators.

Personally, I would rather offer a well-run event that is limited in numbers, than a bigger event that is riddled with problems and does not provide a quailty experience to participants.

What sessions do you think you will attend?