Reflection on Practice: starting to rock 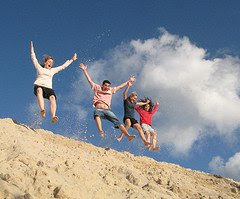 This is the end of the second week of M503.7 Reflection on Practice, which is the online course I am running for registered midwives: we have been exploring our philosophies of practice. I have felt rather disconnected from things this week because I have been unwell. But at least I haven't needed to struggle to a face-to-face class to deliver material.

Elluminate meeting
The week started off with a hiss and a roar, with our first Elluminate (online web conference) meeting.
Computer skills
I was totally blown away by the ease with which the students took to Elluminate. We did not have one technological problem. YEY! At this point I would like to thank David McQuillan who volunteered to stand by on Skype in case I needed a hand.

In the previous week's survey I asked students about their computer skills. One student felt very confident; four students had basic skills but felt they would need help with Elluminate; one student felt she would need help with everything. But the way the students took to Elluminate makes me think they under estimated their abilities. Having said that, a few students have had previous experience with Skype, so they were able to transfer their skills.

This leaves me with the question: is computer literacy for midwives more about confidence than competence?

The first session
Instant messaging was no problem. Nearly all the students had microphones so could talk, and those who didn't have one said they'd get one. We had a play with the white board to brainstorm our philosophy and we uploaded photos of ourselves.
Developing a community of practice?
I don't think we are developing a community of practice, but I thought there was a community feel to our meeting, which I do not see so much in our asynchronous blog discussions. Everyone joined in with discussion and chat, whereas the course blog discussions are mostly between two or three people. It will be very interesting to see what form of communication the midwives feel more comfortable with, and most beneficial for their learning.

What form of communication do you prefer as student and teacher, particularly in regards to the facilitation of learning; synchronous (voice/video) or asynchronous (email/blog/discussion board)?

Thanks for having me Sarah! I really enjoyed listening to more experienced midwive's perspectives and find this so valuable to my own learning.
:)

Thank you so much for coming along.
BTW, have you used Elluminate before? Do you have access to Elluminate where you study?

What do you think about your generations' digital literacy as opposed to us old folk? Do you think midwives coming out of university now have better computer skills and are more willing to engage with social networking, or do you think it very much depends on the individual?

I noticed your blog about using Elluminate. Glad your first session went so well. If you want to save the results of your whiteboard exercise you can easily choose File-Save-Whiteboard and save it as a PDF file. The save button on the toolbar (looks like a floppy disk) will give you the same choices as File—Save from the menu. When you save, you can save the whole set of slides or just one or selected slides including those that you may have uploaded from PowerPoint and those that you created in the session using the tools.

(You can save the whiteboard while you are in the live session but you can even go back and save it from the recording if you want to try this out.)

All of our training and resources are free and they’re available here:

In answer to your question
"What form of communication do you prefer as student and teacher, particularly in regards to the facilitation of learning; synchronous (voice/video) or asynchronous (email/blog/discussion board)?"

I think they both have their benefit. Assynchronous is really good for reflection, and considered answers. I think it's worked best in our course with work on case studies (using Google docs). Reflective blogging's been useful for my own learning & being involved being involved in a blogging community has also been beneficial. But I think you're right - nothing like synchronous communication for the development of relationships/community.

I think in the end it's important to have a mix so that everyone is catered for, and their style of learning. Knowing what midwives are like for talking, I suspect that sessions with Elluminate and platforms like it will be successful, as long as they can attend.

What has been interesting is that I have had excellent attendance at my evening sessions. A couple of years ago I tried teleconference, using phones, which I thought would be the most effective means to reaching midiwves as they use their phones so much. But that method of communication was not at all successful. No-one turned up for sessions. Whether it was because the sessions were in the day when midwives were a lot busier with routine work, I don;t know. Or, maybe I have a group of particularly enthusiastic students this time. Or maybe midwives are more confident about their use of technology? Who knows?