Protests by student midwives in Brazil 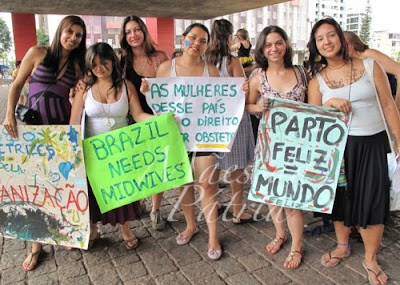 There is only one undergraduate midwifery course run in Brazil at São Paulo University. However, the university has just announced it is closing the program. If any thing, Brazil needs more midwives or fewer because its caesarean section rate is something like 70% - the World Health Organisation recommends it should be 15%.

So a campaign has got going to keep the midwifery education program open. In the last couple of days there has been rallies and protest marches with some of the women...student midwives no less... going topless: http://maesdapatria.wordpress.com/2011/03/27/forca-obstetriz-uma-essencia-da-profissao/

Hopefully that will not be a trend that catches on in New Zealand or Australia...going topless, that is...not protesting!

If you'd like to read the blog post in English, use Google Translate. The translation may not be brilliant but it will give you an idea of the message they're trying to put across. You can also sign an online petition: REQUEST FOR SUPPORT TO THE CONTINUANCE OF MIDWIFERY’S GRADUATION COURSE AT SÃO PAULO UNIVERSITY

Sarah, my name is Bruna, I´m brazilian and I´m in the first year of undergraduate midwifery course. I read your post and I´m impressed! I´d like to thank you for being worried about my course!
I´d like to know your opinion about what´s happening here with the midwifery course and if you know something and what do you think about the campus - EACH USP - where this course is located. I´ll be greatful if you answer me. Your opinion would help me a lot! Thank you again. Bruna

You have asked some very broad questions so not terribly sure how to answer you. As a midwifery educator in Australia I am totally committed to midwifery education. If you can ask mores specific questions I might be able to help.
What information do you need? Sarah

Hi Sarah! I'm so glad to have read it on your blog!

I'm studant of the 2nd year of Midwifery here in Brazil.
We're having a lot of troubles as you can see and your sign and this post shows me how strong we must to be to keep this course in Brazil.

I confess that lost some hope after some bad news we received this week but when I saw people like you who believes in this cause makes me fell a lot stronger.

Thank you, thank you very very much!!