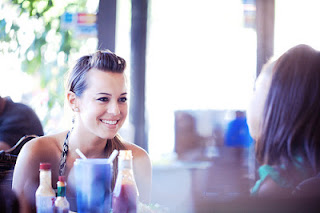 One of the challenges of moving to a new place, especially a new country, is that you have to start from scratch with making friends. I have found this hasn't been too difficult in the past because I have met people through my children - at school, play groups, Saturday sports and so on. But with my move to Canberra, and being on my own, I am having to make a determined effort to get out and meet people.

I have found the most successful way of meeting people in Canberra has been via the Internet. There are two main places I go to that help me get out and about. The first place is HerCanberra, which is led by Amanda Whitley, based around a blog, as well as Facebook and Twitter. It caters for women, although I am sure there are topics that men would be interested in. Not only does HerCanberra spread the news of local events and places of interest in Canberra, but it organises F2F events.

This week I am going to my second evening dinner organised by HerCanberra. I am really looking forward to it because Amanda has told us we must all get dressed up. So I'm excited about wearing a new outfit which I have just bought, although I am stressing about what bling to wear with it, which is a whole other story.

My first HerCanberra evening dinner in November was great fun....probably because I drank a little too much wine! My only critique, as such, was that the age range was a tad too young for me. The women who attended were in their late 20s and 30s. They are more interested in their young kids, and I spent all evening hearing their birth stories, once I made the mistake of admitting I am a midwife. But at the same time, it was a good thing in my new role at the Australian College of Midwives, to hear about the issues that face birthing women in Canberra and Australia.

The second site I am finding to be a great resource is Meetup.Com. This online movement started off in the USA after 911, as a way of bringing people together, who don't necessarily want to find romantic partners, but are interested in meeting people they can hang out with and share interests. This movement seems to be very successful in Canberra with any number of interests groups – apparently, this is because the population is so transient, so people need a quick and effective to find out what's going on.

I have been to a couple of general meet-ups at the pub but don't particularly enjoy them. It feels a little weird going to the pub by myself, and I feel just a tad vulnerable in a large, mixed-gender group. However, I have also joined some smaller groups, such as the Canberra Movie Goers and Canberra Bloggers, and been to a few events and really enjoyed myself. I have met some great people...shared interesting conversations...and had fun. And at the end of each event, gone home feeling great about myself, but at the end of the day, have no ties or expectations to bog me down.

What it has got me thinking about is...does groups like Meetup.com allow us to do away with the concept of friendship, or make it more of a disposable commodity? Think about yourself...why do you have friends? For company...to go to events...share interests...and so on. But there is a downside to friendship. It has to be maintained, which means work. Friends can demand time from you...make expectations of you...cost you money. Friendship can turn nasty...friends can use and betray you.

So are disposable friends the way to go? What do you think?