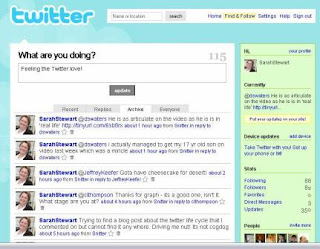 I think I am starting to feel the Twitter love.

For those of you who do not know what Twitter is, here is a post 'Getting my head around Twitter' that explains what it is and here are a few thoughts about how I see Twitter working for midwives.

Party time
I have lurking on Twitter for a few months now, but didn't really find it of any value until recently. I thought it was useful to have a Twitter presence in the same way that I have in Facebook - available to anyone that uses that media, but I do not participate - I tried to post an 'informative' message once a day. But other than that, I didn't engage with Twitter.

Twitter has been described by Nina Simon as being at a cocktail party, where people meet and spontaneously and synchronously interact. The snag with going to parties is that sometimes you do not know anyone, or you are not part of the 'in' crowd which makes you feel very uncomfortable. This has been discussed in length by people such as Vicki Davis in relation to blogging and social networking.

Whilst I did not feel excluded because people like Sue Waters introduced me around, I have felt like I have been on the edges of the party. The parties I have been going to are those of educators who are interested in web 2.0 where I feel I have little to contribute because I am at the stage of of learning about web 2.0. There does not appear to be a midwifery twitter party. If there was, I am sure I would feel I have more to contribute because midwifery is my primary field of expertise and knowledge.

Rules to using Twitter
The main reason for this lurking was that I didn't want to open my mouth and offend anyone, or waste people's time with trivialities. I needed to find out what the Twitter 'rules' were. Martin Weller opened a discussion about Twitter etiquette which was related to the ins and outs of following people on Twitter, but the sense I got from the comments to this post was that there are no rules to using Twitter - you do what suits you and your learning needs. Nevertheless, I try to minimize my personal and social comments and keep my messages to professional topics.

At the same time, I am loving the personal glimpses into people's lives that Twitter is giving me that I would not see in other mediums like blogs. For example, I laughed when Howard Rheingold (the midwifery equivalent of Ina May Gaskin) tweeted that he'd nearly choked to death on a bite of a banana. Now I know that is not a laughing matter, but it is the equivalent of hearing from 'The Queen' about her shopping trip to Tesco - how cool is that?!

Stage of Twitter cycle
So what stage am I in the Twitter cycle? Well, it was a couple of weekends ago that I started to move from the 'I still don't get it' stage to the 'Wow, just found a great link from Vicki' stage - check out CogDog's wiki for more information about the Twitter Cycle.

What happened was I spent the whole weekend interacting with people in a very concentrated way ie I put my party frock on and partied on down. One thing led to another as it often does at parties, and I ended up in several live seminars and meetings, and even got as far as Second Life listening to Leigh Blackall talk about his latest Second Life teaching/learning project.

As a result I have seen an increase in the visits to this blog and my Twitter network has grown. Whilst this has not led to offers of 'all expenses paid' speaking tours or such like, I do know that there is a support/learning network available to me that wasn't there before I joined Twitter.

No, I do not think so. Like Michele Martin I see the advantages of being able to connect with people and get instant responses. I love the spontaneity of Twitter but I rarely use it to follow asynchronous links ie I do not use it to follow blog posts - I prefer to use Google Reader so that I can read blogs in my own time. I am mainly using Twitter for synchronous activities such as giving and receiving feedback and advice, and spontaneously attending online events. And of course, how much I get involved with depends on my other time commitments.

But I do agree with Darren Draper that you get out of Twitter what you put into it but then...doesn't that apply to everything you do?

How are you using Twitter? What do you see as the advantages and disadvantages?

I have actually used Diigo to add sticky notes to this page. If you join the educators group on Diigo you will see them. But I have pasted my response here so everyone can see what I said.

And thanks for such a thoughtful and excellent response from how it feels from the viewpoint of a new person to twitter.

"The parties I have been going to are those of educators who are interested in web 2.0 where I feel I have little to contribute because I am at the stage of of learning about web 2.0". I think that majority of my followers in twitter would feel similar to this that they are just starting out and are worried that they don't have anything to contribute. That is also the reason why many people are reluctant to comment on posts. The sense that everyone knows more than them so what do they have to offer.

"The main reason for this lurking was that I didn't want to open my mouth and offend anyone, or waste people's time with trivialities." The key to Twitter is to see it as our own Personal Learning Network (PLN). Everyone has the right to use it how they want. If someone doesn't like how you use twitter than they can just go ahead and unfollow.
Really it's no different from writing a blog. Similar etiquete but you are more likely to share the mundane in twitter.
Twitter is also more like f2f conversations - if all you do is post links or ask for help you will never make the connections that make people want to conenct with you.

"Nevertheless, I try to minimize my personal and social comments and keep my messages to professional topics". Yes I know initially that is how you feel but followers like the mundane funny things. Do you connect f2f with people who only talk about work or constantly ask for help? Nope and that is why you share trivial things in twitter.

Thank you, Sue, for taking the time to respond to this post. I guess I am a little wary of this because of my experiences on midwifery email discussion lists, where the frivolous is not tolerated. But to be honest, I only feel I am making connections because I am answering people's personal comments. Most people do not respond. But on the occasion they have responded, a connection has been made and who knows where that connection will lead me.

Great post! I understand your wanting to limit your comments to those that are professional, but eventually you will find yourself comfortable enough with your TweetPeeps that you won't even realize you've just tweeted your son's entire hockey game, play by play (yes, I'm guilty). And, kind that our PLN is, my friends responded with exactly the support I loved! It's about learning and sharing and just enjoying. There really are no rules and even so, we've all made mistakes and said stupid things. Welcome! You're going to like it here! @teachakidd

Thanks you for that, Lee. Reassurance about this issue will certainly give me more confidence when using Twitter.

The value of using Twitter to network both socially and academically is that you get to know the people behind the posts. This micro-blogging tool is helping more voices to be heard, as educators can interact with one another without necessarily blogging or podcasting or otherwise publishing.

If it is beneficial for students to realize that teachers are real people with lives outside of school; then it's at least as true that educators benefit in the discovery that their colleagues have many different interests and abilities beyond the classroom.

I was hesitant in October, when I dipped my toe into Twitter...now I am fully invested!

It was a natural progression for me from an online course, to setting up a Google Reader account (which I still check daily), to starting my own blog last June, to beginning on Twitter 6 months ago.

My universe has expanded exponentially. I interact with people from all over the world. We tease each other and share jokes, but we also offer suggestions, assistance, comfort, sympathy, and encouragement.

Twitter is a powerful tool in my repertoire. It stimulates thought and enhances my professional growth.

Rodd: thank you very much for your reply. The thing that really interests me is: how much of our lives outside of school do we want students to know about and visa versa?

Diane: I am finding exactly the same as you. And as a few people have said, if they don't like what I tweet about, they can always stop following me.