Reaching the "I cannot stop" Stage 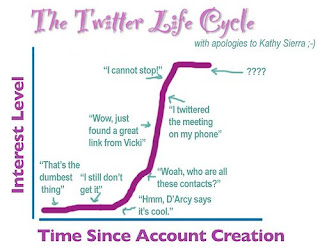 Today I glanced at the number of Twitter posts or tweets I have made and I saw I have passed the 1000 mark. How did that happen? It seems like only yesterday that I started to use Twitter.

"That's the dumbest thing"
At the beginning in January I wasn't too impressed and saw Twitter as a rather frivolous and time-wasting application. I certainly didn't see myself using it on a regular basis. Having said that, I did recognise the potential for midwives who are always on the move. Whilst they may be reluctant to engage with online technologies, most midwives have cell phones. So Twitter could be used to keep in touch with a wider midwifery community.

"Wow, just found a great link from Vicki"
By the end of April I was starting to find that my Twitter network was growing and I was starting to use the network to find information and seek support. But I continued to be skeptical and was only using it for professional interactions eg giving out information about my latest blog posting. I was still reluctant to use Twitter in a personal way because I was very concerned that I would offend people if I posted 'trivialities'.

"I cannot stop"
It was the other week when I realised that Twitter is now a very important part of my personal learning environment. I attended the International Conference on Computer Mediated Social Networking (ICCMSN 2008) where Twitter was introduced to the conference participants. I saw that I was one of only a few people who used it on a very regular basis.

Now, it has got to the stage where I can hardly bear to do without Twitter for fear of what I will miss. I am totally confident with how I use it to post both professional and personal messages - if people get fed up with hearing from me, they can always stop following me.

I use my network to ask seek advice, gain information and extend my circle of colleagues and friends. I particularly like the spontaneous nature of it, eg last night I found myself at a meeting in Second Life as a result of an invitation via Twitter courtesy of @kerryank. And I have found some fellow rugby fans so I now have someone to discuss the latest matches with.

The rewards of perseverance
I am thrilled that I persevered with Twitter because it has become one of the main stays of my personal learning and development. What technology were you skeptical about at first and now find to be a vital part of your day?