Organising and facilitating an online event with social media 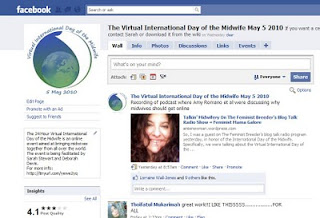 Email
Last year my main method of organising and advertising the VIDM was by using email discussion groups. But as I have already indicated, this method of advertising wasn't particularly successful.

This year I focused on social media to market, plan and facilitate the VIDM, in particular Twitter and Facebook.

Facebook
There are a number of concerns about Facebook, including the attitude of the owner to people's personal information, and the difficulty in deleting an account. Whilst I understood these concerns, I cannot ignore the fact that an increasing number of midwives are using Facebook to connect and share information - at the time of writing this post the Virtual International Day of the Midwife page had 2,486 fans.

Connecting with people
What I found was that Facebook gave me an immediacy of access to people, especially during the event itself. I was able to post information about events, answer questions and queries, and keep a record of people's comments and feedback. Whilst you can do that on email groups, I always feel that I have to be very careful what I say and how often I send emails for fear of overloading people. I don't have the same concern with Facebook.

The provisional results of the event evaluation survey show that Facebook was the most effective in marketing VIDM - 69% people heard about VIDM through Facebook compared to 13% of people who heard via an email group.

Twitter
I also set up a dedicated VIDM Twitter account as well as a hashtag #IDM2010. My impression is that midwives are only just getting their heads around Twitter. What I have noticed is that Twitter is used extensively by pregnant women and mothers, especially mums who are campaigning for better maternity conditions.

At the time of writing this post, the Twitter account had 161 followers - 9% of the online survey participants had heard of the VIDM via Twitter. At this time, Twitter is not an effective communication tool for midwives, but I still think it is worth engaging with Twitter. I used it very effectively for seeking synchronous help from my non-midwifery network , especially when I had urgent technology problems that needed solving. I also used that network for psychological support as during the event.

Blog and Wiki
Whilst I used Facebook and Twitter for connecting with people, and passing on the latest news about the VIDM, I used this blog and the VIDM wiki for processing ideas, making plans, gathering feedback and consulting with the wider community. This is a great way of engaging and including the community you are serving, as well as making use of collective brains and resources.

In my next blog post, I'll pass on some practical tips I learned about facilitating an online event using social media.

Email ThisBlogThis!Share to TwitterShare to FacebookShare to Pinterest
Labels: International Day of the Midwife, Social Media