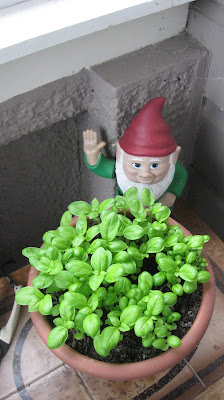 Summer has hit Dunedin and we're just loving the beautiful weather. I know we'll pay for it later down the line with water shortages, but it makes such a difference to my personal feelings of well-being when it's warm enough to put on some pretty summer clothes, get into the garden and potter, or sit out and sunbathe with a book.

Basil
I have had mixed fortunes with my gardening so far. After 14 years of trying to grow basil with no success at all, I have finally found the secret...and that is not to over-water it. This year I have grown basil from seed and only watered it about once a week, letting it get really dry and that seems to done the trick...as you can see from the photo, the basil is really thriving.

Bok Choy
I am afraid I haven't had much success with my efforts at growing bok choy. They have gone straight to seed, which apparently is a major problem if you try to grow them at this time of year. According to my research I'll be better off sowing the seeds later in the autumn as the weather gets cooler. This is a real shame because I love bok choy mixed up with egg plant and mushrooms on the bbq.

Carrots
It also appears I have made a major mistake with the way I have been trying to grow my carrots. I grew them from seed in my porch and then transplanted them into the big pots I am using. But apparently, transplanting carrots is a big no-no. So I've been told they are very unlikely to come to anything. This is a big disappointment to me because I have four big pots of dwarf carrots on the go. I've deliberated what to do...to leave them or pull them out and start again. But for the time being, I've decided to leave them and see what happens.

Any other tips for me and my ongoing efforts to grow veggies in pots?
at December 10, 2010

Hi Sarah!
I'm a new gardener. This year was my first vegetable garden, though I have been growing flowers for two years.
I was successful with cucumbers and tomatoes (those are easy!). I had moderate success with pole beans and snap peas (put them in late, so it was a short harvest season). My proudest accomplishment was a 225lbs pumpkin!

I am lucky to have a a lot of space to grow, but I do envy the challenge of urban container gardening such as you have.

Good luck with your basil!

Wow! Carrie. I am impressed about the pumpkin. What did you do with it...did you eat it?