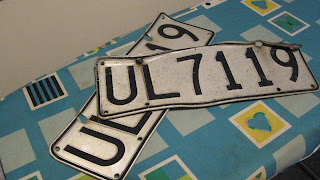 We got very bad news at the end of last week - our Mitsubishi Gallant had completely died and had to be towed to the wreckers. My hubby is very pleased because it gives him the opportunity to buy a new car. But I have been sad because to me, the car has represented our new life in New Zealand.

Mitzy was the first thing we bought when we arrived in New Zealand in 1996. We had an inauspicious start to our relationship because she broke down and stranded us in the Bay of Islands just a few days after we bought her. We were convinced we had been totally fleeced by the Auckland car salesman...who saw us as fresh victims just off the banana boat. But eventually she got fixed and away we went again.

Magic car
One of my fondest memories of the car was when we first bought her. She was programmed to make a ringing noise when we drove faster than 100 km/hour. At first we didn't realise what it meant but then we figured that it was an alarm to remind us about the speed limit. But we didn't tell the kids (who were 6 and 8 years old) - we told them that Mitzy knew if/when they were telling lies and made the ringing noise to warn us. So every time the kids talked, Mark would speed up over 100 km/hour and then we would tease them and tell them off for telling a fib. Of course they'd passionately deny it and it didn't take long for them to cotton on to us, but there for a moment they were extremely impressed with how clever Mitzy was.

Moving home
My other fond memory of Mitzy was driving her down from Gisborne to our new home in Dunedin back in 1999. This drive took us three days and is a distance of over 1000 km. We had the car packed with bedding, personal possessions, one dog, one cat and two children who were now 9 and 11. We had the cat on a lead...how we never lost her when we stopped for breaks, I'll never know. I'll also never know how the cat and dog managed to survive the journey without eating each other.

Stories
Other fabulous memories are the long journeys we used to make...because Gisborne was miles from anywhere...and how we'd pass the time by listening to story books. Our favourite author was Paul Jennings. We had a cassette with our two favourite stories..."Smelly Feat" and "Next time around"....about powerfully smelly feet and hypnotised chicken. I miss those times we spent with the children.