CCK08: Not a theory girl 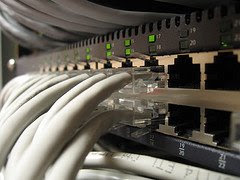 I admit that I am not a great one for theory. I can discuss the ins and outs of how to birth a breech (bottom first) baby and the evidence for and against vaginal breech birth until the cows come home. But if you start talking to me about Foucault and postmodernism, I'll just turn up my toes and rapidly decline into a semi-coma. So to say that I am struggling to get my head around connectivism is a huge understatement. The only reassuring thing is that I am not the only one by far.

What is connectivism?
Connectivism is a learning theory that has been mooted by George Siemens and Stephen Downes. The theory postulates that learning is based on networks and connections - people learn from the connections they make to other people and information. This is in contrast to other learning theories such as constructionism, behaviourism and cognitivism that suggest that knowledge is formed as a result of previous experience or is something that is given to the learner. Or as Ron Lubensky puts it:

Most people view knowledge in one of two paradigmic ways. First, as objective stuff to be acquired, stored, gained, transferred, distributed, etc. Second, as action depicted in skills, performance, problem-solving and professional identity. Connectivism articulates a third paradigm, locating knowledge in the relationships that we have with each other and objective resources. Knowledge is the network. Knowledge is rhizomatic (multiple entry points, rather than hierarchic) and fractal (portrayed at the social and neural levels).

Difficulties with conectivism
There are a number of people who criticize connectivism, and to be honest I am not knowledgeable enough to be able to comment sufficiently. Nevertheless, I do struggle along with people like Sinikka to see how this self-determining approach to learning works in a formal education context which is over-ridden by assessment, learning outcomes, structures and agendas.

Applying connectivism to my own teaching
But as Mike Bogle says, connectivism will not be all things to all people - it will depend on individual needs and context. And I would say that that applies to all learning theory. Indeed, one course probably contains approaches that takes its roots from a number of theories, depending on what is being taught.

Needless to say, connectivism challenges me to think about how I can encourage networked learning in a way that fulfills course outcomes.

You cannot empower learners and encourage them to seize hold of their own learning experiences while at the same time controlling what they learn, how they interact, who they listen to, the networks they form, the way they are exposed to the information, and the time frame in which they are expected to learn it. You can’t both give away control and keep it at the same time. Mike Bogle (2008).

So how I do that in the course that I have just designed and start teaching on Monday will be cause for reflection in the next few weeks.

Hello...
I stumbled across this blog because a friend of mine went to one of your workshops, I think, at uni Otago..
I'm a student midwife from Melbourne, Australia, and have been reading your blog with interest for a while.
I think you have just outlined how I learn. Connectivism - what a fantastic theory of learning! I have always struggled, since primary school, with structured learning and outcomes and timelines and has definitely been something to endure, I have found mostly it's killed my natural insatiable curiousity and endless desire to learn.

I know I am very capable intellectually and in terms of research, but this semester I have really struggled to get any work done at all. But now I realise that I have been learning so much, and learning chaotically. We have follow through journeys as part of our course where we follow women in the community experiencing the pregnancy continuum. We learn so much - I have been doing research that women have requested and learning about it myself, learning about clinical scenarios as they arise when I have been lucky enough to attend homebirths. I learnt about haemorrhage management and really solidified my understanding of PPH by attending a homebirth where the woman haemorrhaged.. there was no panic, there was just professional management, that included the woman eating some placenta. It was so different to learning at uni or even learning at institutions on placement, where the student falls into the background and might get a word in about it later with the clinical educator.
I'm studying a subject this semster called women's health, a sociopolitical context, and I really have not done much. But for the last two years of being a student midwife, the sociopolitical context of women's health has been my life.. I read Kitzinger for enjoyment, Donley, Robbie Davis-Floyd and am endlessly passionate about it.. I've also been involved in campaigns to achieve maternity reform in Australia, which has involved lots of networking and learning way beyond the scope of the course. So despite learning so much in the last six months, I'm about to fail or get a very mediocre mark for this subject.. not sure what I'm going to do about it, hmm. I've always found structured learning so restrictive, but will happily seek out and read theses for fun, and will talk for hours with pregnant women about their lived experience, and midwives about their practises.

A very frustrating experience for me was putting a lot of effort into an essay on post natal post traumatic stress disorder, then receiving it back with full marks but no comments.. it just seemed like there was no point in writing it, I wanted to engage people in dialogue. It's here: http://burningskyfire.livejournal.com/503682.html I've since posted it around on a few message boards and people are interested in publishing it in various birth magazines, which is fantastic, but I was so disappointed that there was not a single comment on it.

Anyway thanks for your inspiring blog, it's encouraged a lot of learning and reflection for me.

Thanks for the mention! Like you, I'm just trying to make sense of it all.

You should know that when I recently left a comment on Stephen's "Half an Hour" blog, he came down on me like a tonne of bricks! The risk is always that something more or different is mistakenly read into comments, leading to misunderstanding. It's good when we can connect in our understanding, as you have kindly shown. It is even better when we can talk about it when we don't!

@alaanja
Thank you so much for your encouraging comments. I really appreciated your feedback which made me think that this blog is worth continuing.

Feedback does help give you a sense of where you are going and how you can improve, so I can appreciate your frustration. Have you thought about talking to your lecturer about your feelings and your work? I'll be honest, as a marker, I tend to write heaps of comments when I read an essay that needs lots of work. An essay that is nearly 'perfect' will probably get few comments from me - I just enjoy being able to sit back and read without having to stop every few lines and write something. So the fact you got no comments is probably a huge compliment.

I would certainly submit your essay for publication if people are encouraging you to do that - you'll get plenty of feedback from that process.

rlubensky: That's a real shame about your experience. I have had that same experience with a person I respect hugely. It has happened a lot of times. But things have got to the point now where I don't say anything more than I have to to her, which has ended any chance of meaningful discussion and collaboration, which I think is a real shame.