The context of midwifery education and Second Life 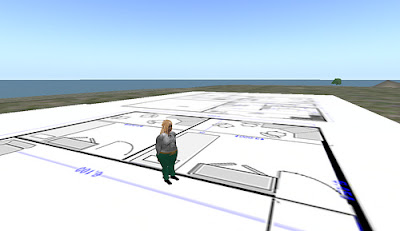 As the regular readers of this blog will know, I am lead educator in a project to set up a virtual birthing unit in Second Life as a teaching tool for student midwives. I haven't written about the project for a couple of weeks because we have been busy thinking, discussing and working through process issues.

Working out a process
I feel we have gone round and round in circles a number of times, but that is to be expected in a project of this size, and considering the diversity of people involved. So if you are going to start a project like this, make sure you factor in time for the 'process' that people have to go through with regards to decision-making before work can start.

Focusing on learning outcomes, not Second Life product
There has been concerns that we are focusing too much on the product of Second Life ie the birthing unit, and losing sight of the student and their learning needs. To an extent this is inevitable because the research funding has been granted to develop a teaching/learning tool in Second Life. Nevertheless, it is a waste of time and funding if we develop a place in Second Life that does not meet students' needs, which becomes an empty artifact of no use to anyone.

Thus, it is really important for the project to consider the context the midwifery students are working in, and design learning activites and resources that take this context into consideration, and also keeps the learning objectives of the project firmly in place.

Leigh Blackall has asked a number of questions that need to be answered in order for us to understand the students we are designing this project for. If you designing a similar project, it may help to ask yourself the same questions about your students.

Background
The midwifery students we teach at Otago Polytechnic in Dunedin, New Zealand, range in age from school leavers to mid to late 40s (sometimes older). They are all women - we have never had serious applications from men at the time of writing this blog post. The women are mostly New Zealanders, but we also get a few overseas students from Canada and the USA.

Many women have their own families, but some are so-called 'young, free and single'. As well as their families to look after, they also have part-time jobs to help fund the course, which is very expensive. On top of the academic work they have to complete, the students have to be on-call for the pregnant women they work with, as well as work shifts in maternity institutions. In the third year of the course, they travel all over the country for their long clinical placements. Christchurch Polytechnic School of Midwifery runs an identical program, but the other midwifery schools in the country have different set-ups.

So our students have to be highly motivated to do the course because it is very expensive, requires a high personal commitment both in terms of academic and clinical work, and sets high standards for achievement. And their spare time is very precious to them, especially as the course has been elongated to 45 weeks per year.

What are the prevailing attitudes to computers, the Internet and if they have heard of Second Life, and what are their preconceived ideas of all that applied to their education?
I have been teaching midwifery students for nearly 10 years, and it has been my observation that their attitudes and computer skills have changed over the years, but not to the extent that I would have imagined. In other words, they have become more computer literate, but not necessarily more digitally literate.
The priority for student midwives is to learn the skills to be able to catch babies as opposed to using computers. Having said that, I think that students are increasingly aware that the Internet is a tool for them to keep in touch with each other.

What might their motivation levels be like?
I would say that motivation levels would not be high unless the students could see that there was something in it for them. Workloads are so high and time commitments are so tight that students are unlikely to engage with anything unless it will help them pass assessments. And they have little or no time for anything that is not directly linked with helping them get their grades.

What is their access to computers with the right specs going to be, and what about Internet connection?
Having said all I have just said about the students, that picture is going to change from this year. The course is now being delivered in a blended mode, using face-to-face and online teaching. Instead of the students moving to Dunedin for three years, they are staying in their communities, and only coming to Dunedin a couple of times a year.

As a result, students have been given a computer specs list that they must conform to. They have been advised that they should have broadband access. However, there will be rural students who only have access to dial-up.

This new method of delivery may change what I have said about students' ability and motivation. Now that they are working more at a distance and do not see each other frequently on campus, their motivation to use the Internet for networking and finding information may change and increase.

What sort of supports (if any) will be in place from the school?
Students will be given face-to-face training on how to use Internet resources when they attend classes on campus, in computer labs. The main resources that will be used are Moodle, Elluminate, Facebook and videos. At this stage, Second Life is not a resource that is being used outside of the SLENZ project.

What sorts of restrictions (if any) might the school have on the Internet and Second Life?
There are concerns about how the Internet is used in relation to patient/client confidentiality and privacy. Students often make mistakes as they learn, and need to be taught how to communicate and reflect in a professional way that minimizes risk to themselves, the school, the profession and women. Thus, the main restrictions at the moment appear to be where students work ie students will be restricted to closed spaces. However, as far as I am aware, no restrictions are being planned for the Second Life resources.

What else can you tell us about the context and frame of mind in which key people (especially other teachers) will be approaching these resources?
I believe the lecturers at Otago have mixed feelings about the Second Life project. On the one hand, they see it as exciting and innovative with a real potential to be a tool that helps students practice decision-making in a simulated environment. They are also very excited about its potential for networked learning.

On the other hand, they are stretched to capacity, especially with the development of the new program. They do not want to have to take on yet another project that is going to consume a lot of time, to both learn the skills to navigate Second Life and teach the students.

If you are a midwifery student, what are your attitudes to computers and to the Internet? How do you use it? What do you know about Second Life? How would you use it in your education?

If you are a midwifery teacher, what are your perceptions about students' use of the Internet? How do you think they would engage with Second Life?
at February 04, 2009

Thanks for this Sarah, it confirms most of what I thought, and surprised me on a few fronts as well. Particularly the high expectation for computer and Internet access that the Midwifery Programme is requiring of people. Especially considering the % of NZers who actually have a computer and broadband in the home (33% in late 2007).

I really hope your colleagues and other midwives leave comments to this post and help us consider all thsi context carefully.

Thanks for posting Sarah.

Let's give it a few days for further comment from people in your sector Sarah... and while we wait, let's type up a few of the easier ideas we have in mind for activities and resources suited to the 1st Phase (Birthing Unit and supporting activities).

I'll write to my blog an idea or two I have on Monday to get us started if you like.

the expectation for computer access is no different than us expecting students to have NCEA level 3 in maths, english, science etc. Students who do this program must have the equipment to support their studies. The main problem I see is internet access, and presumably that has been built into the program.

BTW< have started thinking about stage 1 - will post shortly.

Great post Sarah - honest as ever. It really interests me to see your info about students use of the internet (or lack of it). It makes me all the more determined to find novel ways as a clinician to temp colleagues for a dip in the web2.0 seas. I really think providing bite sized manageable experiences (like the OTwikiflash) can act as a great carrot to entice people to see the opportunities the internet can provide.

bite sized. Right on Buckey! I reckon initial activities for first timers in this project should take no longer than 20 minutes each.

Find the birthing unit and landmark its location = 20 minutes

Compare and contrast the birthing unit to an inworld hospital = 20 mins of more...

I agree with you both about doing things in small segments. I don't stay in SL for any longer than an hour at a time, and that is usually because I am attending a meeting. To stay for long, there has to be something that really engages me.

I'm not having much luck here. I clicked on the computer specs list link, and go this error message

@David: hopefully I have fixed that.