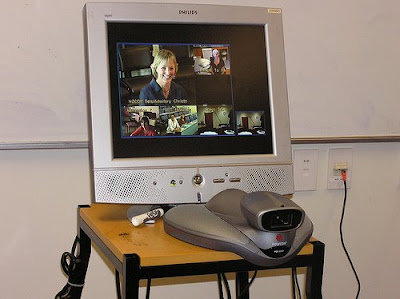 Today I attended a video conference. It included most of the educators in New Zealand who teach undergraduate student midwives about screening for family violence. We were based as far afield as Wellington, Hamilton, Auckland and Christchurch. It was good to catch up with these teachers and find out about the latest teaching practices in this area.

But there were a couple of things that made an impression on me.

The first is what a pain video conferencing is. It took me half a morning to organize access to the compatible equipment. I had to go to another institution to use it - I could have used Otago Polytechnic's equipment, but it would have cost a significant sum to bridge into the system that was being used.

Then this morning, I had to make my way into town, find a parking space and then find the venue as well as the technician. This took an age and I was late - no one knew anything about it even though I had arranged it weeks ago. How much easier for me (being the extremely lazy person that I am) to have just hooked up into a web conferencing program like Elluminate on my home computer.

Now, after being a grumpy old person about this, I must acknowledge that midwives seem to really like video conferencing because they like to be able to 'see' who they are talking to. A lot of midwives do not have access to Internet resources that support web conferencing and do not have the skills to be able to use it. And there is an increasing number of video units being installed around New Zealand which will make video conferencing more accessible for midwives. I, for one, was very pleased that I did not have to take a full day out of my schedule to fly half way around the country for a two hour meeting. But in the long run, I wonder who will carry the cost of this.

The second thing that was impressed upon me was how much work has to be done to encourage people to think about things like open access, creative commons and collaborative work in blogs, wikis and so on.

This morning we had a discussion about the resources we use. They have been developed by The New Zealand College of Midwives and as such is copyrighted for restricted use. I have suggested that NZCOM thinks about making this material available on its web site under a creative commons license. I have also suggested that NZCOM thinks about using a wiki or blog for the collaborative work that is scheduled to be done on this family violence screening program later in the year.

It will be interesting to see if and how this eventuates.

I wonder what you thought of the video conference once it was underway? How did it compare for you with something like Elluminate, or Skype or maybe even Second Life?
I have only been involved in one video conference and, while it was better than flying half way around the country I did not find it very interactive. I found the conversation slow and stilted I prefer online communication by far. I am interested to know if that is just me.
My principal concern with video conferencing though is that I believe it is yesterdays technology. I would be concerned about putting a huge financial commitment to this. Online social networking is developing so quickly. I am sure this technology will far outstrip the possibilities of video conferencing very quickly.

Video Conference has been very useful but still everything has it's own disadvantage.

If you need to use web conferencing next time try PalBee. It is Free video conferencing solution that allows you to see your colleagues and collaborate together on a white board. Additionally, you can share power points and pictures. All you need is Internet, webcam and microphone.

We use the Free service for online classes provided by Batipi. They offer a meshed video/web conferencing service that combines all facets of online collaboration, eg, presentation, multi-party video feeds, whiteboard, chat, app sharing and web sharing... I am currently subscribed to their free online class service but for a reasonable amount they provide you with great unlimited monthly meetings.
Hope this is informative, its my $0.02...
regards,

Thank you all for your comments. The other software I am aware of is Yugma but I have not used it yet.

As for the quality of the conference, I didn't think it was any better than the Skype calls I make with web cams but those are only on a one to one basis. I found the conversation slow and stilted like you, Carolyn. It certainly was no better than the web conferences I have attended. But, there is no way that the average midwife would be able to use Second Life for a conference call.

For myself, I agree with you, Carolyn, but...if video conferencing is what midwives want to use and it works well for them, then who am I to question that?

6 person call isn’t a headache but in my case it certainly got pretty rowdy - do not try it with 6 equally outspoken people!Good to see the post. I write for ooVooworld, the unofficial WOM world for ooVoo, and would love to know if any of
your readers have tried it and what they think (good or bad) and if anyone else has had a 6-person chat…

I use an all-encompassing conferencing product. It has audio/video capabilities, whiteboarding, presentation mode, etc - the works.

You can even use it FREE for a whole month with no limitation. It has a capacity of 500 seats.

I use livemeetups.com, it's free web conferencing solution with integrated Skype chat and conference call.
The online meeting solution is software on demand and you can use anytime you need and from anywhere.
It's absolutely free service and there are no initial fees, monthly and annual charges.
With livemeetups.com I can share my desktop, my presentation, current application and my web browser real-time.

Its so highly informative things are posted in your blog. I was seeking for this type of Business related Conference blog that have a fresh and interesting content.
Web Conference