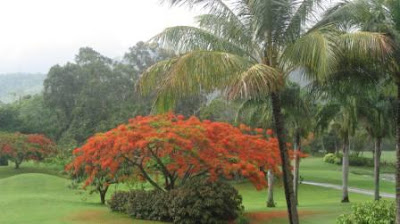 This week has been a very hectic one for me as it has included a quick trip over to Cairns. I was employed by Aged Care Queensland (ACQI) as a consultant with the remit of facilitating a symposium of indigenous and Torres Strait staff working in aged and community care. The focus of the symposium was their use of technology, especially in relation to eMentoring. The participants ranged from care givers to managers.

In this post I want to focus my reflections on my facilitation - in the second post about this symposium, I will report what participants discussed and how they saw the use of technology amongst indigenous people in aged and community care.

What happened
The symposium lasted over two days. During the afternoon on Wednesday we sat around and had a discussion about technology; how it could be used, if at all, by aged and community care staff; what the barriers were and what education and resources they needed to be able to use technology effectively. The second half of the symposium on Thursday morning was planned to be a computer skills workshop. The participants had access to laptops and wifi, and we planned to help them look at Skype, Google Docs and other tools that they might find useful.

What went well
The two days were very social. We had lots of frank and honest discussion. Initially, I was nervous because I hadn't worked with Australian indigenous people before and I was mindful about cultural differences. I did not want to be disrespectful and offend anyone. However, we had a simple 'welcome to country' and I felt very welcome to the place and gathering of people.

Initially, there appeared to be considerable confusion about the purpose of the two days, and people appeared to be resistant to the idea of technology in their workplaces. However, at the end of the symposium the evaluations were very positive. Everyone went away with at least one thing to think about, whether it was a tool to explore or recommendation/s to make to their organizations.

What didn't go so well
There were two main things that didn't go so well as far as I am concerned. The first session was very muddled. I had a plan for what we would discuss and the sequence for events. But there appeared to be considerable confusion about aim of the symposium, what eMentoring was, and little or no understanding about the ACQI eMentoring program. Consequently, we seemed to go round and round in circles getting more and more confused. Eventually I was able to pull things together with a simple definition of mentoring and a demonstration of Skype which showed people what could be achieved using electronic communication.

Break down of technology
The computer workshop was a shambles because the wifi network kept dropping and the lap tops were not set up properly for us to use them. I spent far too long trying to fix the technology than I normally would. I felt a keen responsibility to ACQI to 'succeed' with the demonstration of technology because that was an important part of my brief. Once I gave up worrying about that, I was able to relax and lead a discussion about the tools I recommended and how they could be used.

Self-evaluation
In terms of my own evaluation, I am not really sure what to think. I don't feel things ran half as well as other workshops I have facilitated. Yet at the end of the two days, the participants sounded very positive in their comments - they had definitely moved in their appreciation and understanding of technology in the workplace.

The feedback I was given by someone at the symposium was that facilitation did not appear to be my natural role and I did not cope well when things did not go to plan. I certainly agree that I was not so relaxed as I usually am because I was very conscious of the outcomes that I had to achieve on behalf of ACQI. At the same time, I believe I coped extremely well considering the technical difficulties that were thrown at me.

What I'll do differently next time
1. Insist that a computer workshop is held in a computer laboratory set up for the purpose.
2. Make things very simple, go right back to basics and assume people know nothing, and build from there.
3. Start the session with a demonstration of the technology so people immediately know what I am talking about.
4. Have a fully developed Plan B - something I can do or present if the technology fails.

What are your tips for good facilitation?
at November 29, 2009

Email ThisBlogThis!Share to TwitterShare to FacebookShare to Pinterest
Labels: eMentoring