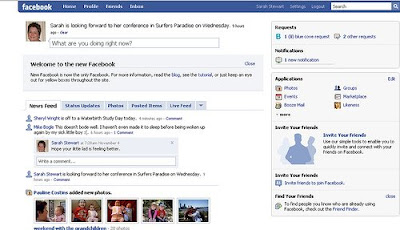 It looks like midwifery is starting to see the benefits of social networking.

Facebook campaign
I am fascinated to watch a campaign unfold on Facebook called 'Celebrate New Zealand Midwifery'. It's a campaign started by David Small in response to a media campaign being led in Christchurch against midwifery.

Clearly it is gaining momentum and has over 200 members in just a week. And, it has been endorsed by the New Zealand College of Midwives, our professional body.

Skeptical
Up until recently I have been skeptical about the value of Facebook in terms other than entertainment, so it will be very interesting to see how this new development unfolds. I think I have moved from practically ignoring Facebook to starting to see its benefits and potential in midwifery education and practice.

How do you use Facebook? What do you think are its benefits in your life, work and practice?

Dear me...I think I mostly use facbook as a tool of procrastination! But for me its good to keep in contact with friends overseas.

I have to admit that's how its been for me. But I have just had another message about a campaign to promote midwifery in Australia via FB, so there's obviously more than use to it.

I find facebook worrying amongst student midwives. I have found dozens of examples of breaches of the NMC Code on facebook & breaches of patient confidentiality. We need to wise up - facebook is not just for fun, it can end our careers.

You're right - and that includes any sort of online communication, and I have to say, face-to-face communication. Its just as easy to say something out of line at a party or cafe, as it is on FB.