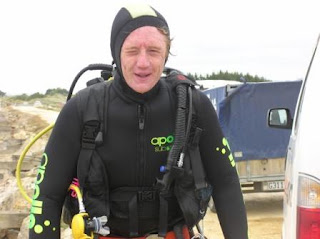 The activity for Day 2 of the 31 Day Blog Challenge is to run an audit of first time readers on my blog. This involves asking a friend or family member to surf my blog and give feedback about its look, navigation, content and design.

Well, the only person available to help me with this was my 17 year old son, Andrew. I knew it was likely to be a big mistake but after I submitted to blackmail - I had to take him to lunch - he sat down and gave me a full three minutes of his concentration.

Coming at no great surprise, the things he was especially attracted to was the quiz, and the 'funny', non-professional posts such as 'It's official - I'm too fat'. He was very attracted to images, which is why he liked my 'fat' post - because of the photo of the squirrel. He surfed off and had a look at my Flickr photos as well as Flickr photos belonging to the the images I have attached to my posts, in other words he wanted to see more squirrel photos! He got also distracted into Second Life because I was running it at the same time and there were some extremely funny noises coming from it. He read my profile and laughed at my photo - I am not sure why, I think its a nice photo!

As for the content and design, suffice to say, he generally thought it was very boring until he got to the photo of the squirrel! But he did understand it was about midwifery and thought the blog had very 'business-like' feel which he felt was appropriate for the content matter. He didn't think the look of the blog would attract a young person, but then again midwives and educators will be a little older than his age range. Navigation was not a problem. And he didn't have any suggestions about how I may change the blog.

So I think the moral of the story from Andrew's point of view is to keep using lots of images as well as a thread of humor running through the blog.

If you are a first time reader of this blog, what do you think about the content and design of this blog - what is your first impression?

As for Andrew - I think he is a visual learner, which may explain a lot of things!

Postscript: It has also been really useful to have an experienced blogger run an eye over my blog. Sue Waters gave me a number of excellent suggestions - follow the comment section of this post to see what she had to say.

Totally relate to the challenges you have just faced; getting someone to do your reader audit is hard work. Most importantly he picked up some good points -- your use of images is very good. The most interesting the image the more it grabs attention. Most people struggle to read posts that are long, that don't include images. Images grab your attention and make you pay attention. I also really like your posts on It's official -- squirrel was really cute too. Definitely your humour in your posts is one of your strengths.

So I hope you are okay but I have just done a quick look at your blog from the view point of an experienced reader. One aspect of blogger that I am not so fussed on is the constraint of not being able to add pages (e.g. my about information is located on a page). This gives you a lot more flexibility to add more information for new readers in a manner that won't clutter your site. However the benefit of blogger is it's easy to use.

You need to add a Search Widget to your site. I suggest if you have several sites that Lijit is an excellent choice. Search is important because it helps people locate posts on your site. I would also add a Feed Burner feed with email subscription because it will make it easier for people to subscribe. At the moment your tagline below your title (Sarah Musing's is too long -- ideally a tagline should be a short sentence.

Keep up your good work. I always look forward to reading your posts!

You're lucky! I wasn't able to find anyone to audit my blog yesterday,but it's on my to-do list. just didn't happen on day 2! I also really like the quiz/poll on the side - is that a blogger thing or is it a widget I could get somewhere?

Hi Kate, the quiz is a 'blogger' thing. I can't remember where I read it, but someone said that a quiz is a very good thing to have on your blog - helps to hook people in.

Hi Sue, thank you very much for your feedback - brilliant as usual. Will no doubt quiz you about your suggestions in the next few days.

This site has a search facility at the top left hand corner - does that not suffice?

I know what you mean about the blog not having enough pages, but to do that, it would mean I would have to transfer to another blog program, and I am not sure I am ready for that yet.

oops - sorry obviously have not uesd the search tool on blogger however this may be why others add their own search to it. To make it more obvious. Check out Drapes Take for his layout.

As you can see, I did what you suggested, Sue.

The only other question I have now is the overall color scheme. I read something that you should use white background. Do you think I should change or will it 'do' as is?

Excellent work Sarah - may be also worth adding a Subscribe by RSS to the side menu as well.

My response regarding colour scheme relating to TechnoLOTE. It actually had more to do with the template she is using and the green makes reading harder. In your case the colour is fine. My personal preference for my own blogs is to have a wide text area so it makes the posts look smaller. Which is neither here nor there if they read in a feed reader.

Tried to do a RSS feed as well but cant quite get my head around feedburner. Any other suggestions for a widget?

The only trouble is: my sidebar is now getting more and more cluttered, contrary to advice to keep it simple. But I am reluctant to get rid of anything I have there.

In feedburner - click on the Publishize tab and then click on Chicklet chooser in side menu. The default icon is fine. Go to bottom of page and copy html code. Then in blogger account add new text box to side menu - when text box opens click on html code and paste the code. This should work - I hope provided blogger has no limit on number of text boxes. Good luck.

As you can see, I've followed your advice. Already have one subscriber using email, so very pleased about that.

Got a feeling (but may be wrong) that people who know nothing about RSS feeds are much more likely to subscribe by email, so that may be more likely to appeal to midwives.

Definitely agree. For those not used to RSS email is a really good option and it is interesting to see who does subscribe via email (record show you their email addresses). My email subscription is not huge but they may not read my site if I didn't have it. Look forward overtime seeing how many subscribe to RSS vs email on your site compared to mine.

how kind of andrew to look at your blog critically for a few precious minutes - hes quite analytical isn't he. I agree with him - your images are great - they really make me laugh and warm me up. Some of the techy e terms/words are so foreign - I just gloss over them and feel like a need a bloggerectomy - so i tend to scroll thru for something I am familiar with. But only cos i always come to this thinking I will look for just a sec - and then something always grabs my attention - and an hour later.....
I think the blog is going well and seems more and more interactive.
Rae