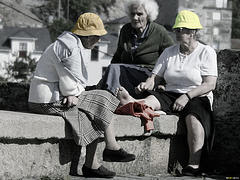 One of my goals for this year was to find out more about Twitter, because I had heard it mentioned a number of times especially by people like Sue Waters and it seemed like the 'in' thing to join. But despite reading a number of blog posts, I still didn't really understand what it was - is it an asynchronous or synchronous tool? Is it a 'chat' program that is designed for cell phones? Oh well, whateva, I thought - I've got enough to do without worrying about Twitter.

However, two posts confirmed that I really must look into this more closely. The first post was by Michele Martin who wrote 'Six reasons people aren't commenting on your blog'. To cut a long story short, this post was extremely successful for both Michele and I because it led to a lot of comments and discussion that spilled into my blog, which in turn increased my readership. The point of this story was that this all came about because of Twitter - someone read Michele's post, passed on the word and... the rest is history.

The second post was written by Clare Thompson - 'Tools and Sites I use List'. In her post Clare articulated exactly the same feelings that I had - she said "not sure I get it, worried that it will suck me into the abyss". So I got in touch with Clare, and after some discussion and support from Sue, we both joined. I loved the idea of having a mate to hold hands with - it made me feel a lot more confident. I also felt that if I did not join Twitter, I was not hip or groovy, and there was a danger I would be left out in the cold!

So I have discovered that Twitter is actually a synchronous instant messaging program that allows you to post very short posts (140 characters) to an online community of people who you 'follow' and who 'follow' you. Getting started was greatly helped by two blogs posts: Caroline Middlebrook has written a Twitter guide called 'The big juicy Twitter guide' in which she talks about the technological and social aspects of using Twitter. The other post I found really useful was 'Early morning Twitter education' by Kate Olson in which she talked about how to manage your 'tweets' or messages.

There appears to be a difference of opinion about Twitter. On the one hand, there are those such as Chris Lott who see Twitter as playing a valuable part in a community of practice, whilst others including George Siemens who cannot find any reason to join.

My initial impression is that the effectiveness of it very much depends on the community you belong to. If I want to idly 'chat' to an individual, I am more likely to use Skype or gmail. With Twitter, I have an instantaneous connection with a community of people who are able to pass on information there and then. I am still left with the question: why is that any better than asynchronous connection and I guess the answer is 'it isn't' - just different. I like the comment that Chris Lott made that Twitter is another "piece of the puzzle" - it becomes another part of my personal learning environment. The major question for me now is how much attention I will be able to pay Twitter when I return to work at the end of my summer holiday.

I have had a wee look at the twitter thing and can't get my head around the txt speak thing at all. Can't really see the appeal although i do agree with your next post that if there was a group of like minded people then they may be able to brainstorm together through this. I do think all these things can be phenomenally time consuming, interesting but not necessarily useful.

Ummm...I am keeping an open mind at the moment. Just having fun testing all these things. Can't see myself staying so engrossed once I get back to work and really getting stuck into my PhD writing.